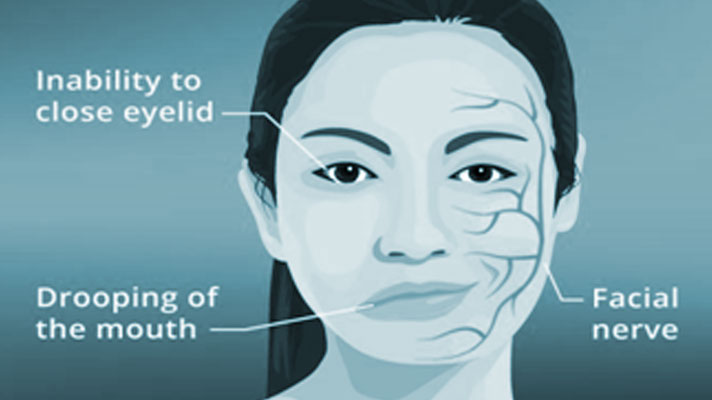 Bell’s palsy is a unilateral facial paralysis of sudden onset. Its cause is unknown but is believed due to injury or inflammation to facial nerve or due to viral infection leading to oedema in close tunnel in temporal region resulting into temporary or permanent loss of nerve fibres. It has an average annual incidence rate of 23 to 25 patients per 100,000 populations. The right side is more often affected as it is in case of 63% of all Bell palsy patients.

The Ayurvedic term for Bell’s Palsy is Ardita. In Ayurveda classics Vata dosha is considered as a chief factor for the physiological maintenance of the body. Factors provoking Vata dosha result in the instantaneous manifestation of diseases, which can even prove to be fatal. Therefore, the diseases caused by Vata dosha only are of utmost importance. The symptoms of Bell’s Palsy in Ayurveda may be considered as the symptoms of a Vata disorder because Vata is the one dosha which control the motor and sensory activities of the body, mainly the brain function.

The main pathology behind facial palsy is the inflammation of the concerned nerve, in Ayurveda without the involvement of pitta there would not be any inflammation, as the nerve get blocked the blocking factor will be mainly Kapha, depending upon the severity of blockage the nerve damage will be there, and this determines whether the disease is Vata, Pitta or Kapha predominant, the treatment will vary according to the predominance of these dosha.

A single case study of Bell’s palsy is reported here in which the Nasya karma (One type of Panchakrma in which medicines are infiltrated through nostrils) and fomentation of face by leaves of specific Ayurvedic herb) along with use of internal medication (Ayurvedic oral medication) were administered and after one month, patient got relief from restricted movement of right eye & watering of eye.

A 36 years old female patient with two weeks history of right sided facial paralysis visited Attice Ayurveda, Gurgaon. The patient had revealed that she had sudden onset of throat irritation and redness of right eye. She neglected this for 2 days, next day while having her meals she observed difficulty in eating the food and drinking the water. Food was dribbling out of mouth from right side & her relatives observed deviation of angle of mouth to left and later the complaints worsened and patient developed heaviness of tongue leading to difficulty in speech. There was no previous history of similar symptoms or a recent infection. Patient had no history of hypertension or diabetic & did not have an exposure to extreme cold.

Table no. 1 – Examination of cranial nerve

Patient showed significant improvement in the sign & symptoms of Bell’s Palsy, thereby making better quality of life of the patient.